Update on the DFE and Vital Consultation on ICT #GuardianCS


Peter Twining started his session by restating that the Disapplication of the current ICT Programmes of Study (POS) will begin in September 2012, with a new curriculum expected in September 2014. The DFE and Vital recognise that “Digital” changes everything, ever job, every discipline. For these reasons, change is necessary.

However, Michael Gove has been less than kind about ICT and its teachers, despite the fact that in primary schools, 2/3 of schools are judged good or outstanding based on the most recent OFSTED data (2008). At secondary, this drops to under ½ of all schools are good or outstanding. It seems that GCSE ICT is a disaster. The Royal Society went on to state that “Every child needs to be digitally literate by the end of compulsory education.” The Royal Society at no point mentions that “computer science” is compulsory, rather a combination of all the ICT strands, which are displayed in the image below. 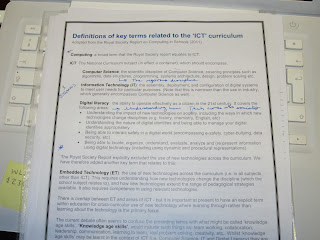 Note that the three strands of ICT are defined as Computer Science, IT and Digtial Literacy. One of the reasons why computer science should not be delivered discretely as a compulsory is because there are simply not enough people to deliver it.

It is worth noting that the current QCDA was and still is just guidance and actually the POS has and always will remain open. Teacher have done and still can teach any of the three strands and still meet the QCDA guidance.

Disapplication (Sept 2012)
There was no guidance from Gove as to what we should now do, he referred to a WIKI curriculum, however much of this is incomplete. There are no success criteria or attainment targets in which to judge the success of teaching. Therefore, many schools will not deliver ICT, despite it being a legal requirement. Whilst it is true, that in a general school inspection, Ofsted will not inspect ICT; it is still unwise to completely drop ICT from your school’s curriculum. Come 2014, ICT will be a foundation subject and if school’s have discontinued ICT from their school, there will be a huge skills shortage in both staff and students. Please ensure that your students do not lose their entitlement to ICT, do not slow down or soft pedal.

New ICT Curriculum (Sept 2014)
Peter Twining strongly restated that the subject should not change its name. Simply because something is not working, changing the name will not change anything. We have worked hard to build the name of “ICT” in the UK. Previously, many countries around the world would only use the term “IT”, but now on Twitter and in all educational journals and books published in the UK, “ICT” is the common term for our subject.
In 2014, the curriculum will be much thinner as a foundation subject. It is likely that the POS will be 1 side of A4. Indeed the POS and the attainment targets will probably be merged, with no level descriptors. Peter predicts that Gove will not tell you what to do, he will merely set high level attainment goals.

As a discipline, we need a united voice to succeed, rather than disagreeing and pushing particular views. Peter said all parties need to unite under the same banner of “ICT”: CAS, NAACE, ITTE, #DigitalStudies . The worst case scenario of a fragmented voice would be a compromised curriculum which is agreed by all parties and their vested interests.

Peter also discussed following a model like science, where you would have a National Curriculum for KS1 to KS3, followed by discrete sciences at KS4 i.e. Bio, Chem, Phy. In ICT, we could follow the same structure, specialising in either IT, Comp Sci or Media Studies at KS4. Incidentally, creative arts (Photoshop, video editing, special effects, animation and compositing) would all fall into the media studies bracket and during this two year period, could be taught by Art teachers as well as ICT teachers with the skills. 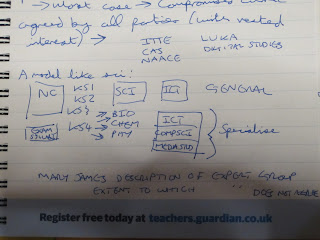 Who will lead?
5xICT specialist schools
Teaching schools and the New Technology Advisory Board (NTAB)
The NTAB will steer and co-ordinate the curriculum in the next three years. Why? Because DFE will not  (be able to) do it.

Peter also revealed new features of the Vital website, including the evidence hub where research meets practice. Whilst there are some schools leading in shaping the future of ICT using:

Bring Your Own Devices (BYOD): Students bring their own device, register their MAC address and the they can use their device in school. This has been successfully deployed by Saltash .Net Community School

Bring Your Own Tech (BYOT): You can bring your own tech into school and it simply works.

Vital wanted to hear from more schools where such schemes are working. He urged people to sign up to Vital. Free codes will be distributed to all conference attendees in the near future. Teaching schools would also get a discount to Vital membership.

Closing word
Do not lose ICT capacity now, otherwise 2014 will be a shock
Computer Science is a specialism at KS4, it is not the be all and end all.
Posted by Mr Lau at 14:20