What Went Well This Year

So this year was all about trying new things. I thought I'd blog about what worked really well and also things that we tried and didn't go so well and what we all learnt from this. To put things into context, I'll separate it out into Key Stages 3,4,5 for ICT and KS5 for Media.

The relationship with one Y8 class was kind of strained, poor behaviour, low motivation etc. So I asked my Y8 students what they wanted to learn about. This was partly inspired by the student democracy that I witnessed in Malmo Sweden. For both Y8 sets, I made a list (one is shown below):


We covered one or more of these every lesson from May until the end of term. These took various forms, starters, plenaries, whole lessons, homework. It was great.

This is the standard of some of the work that students produced independently: 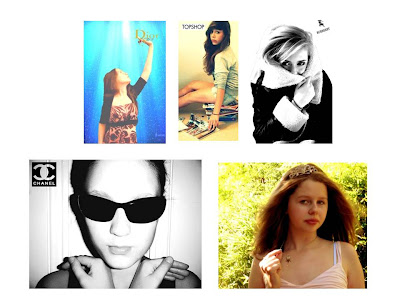 By independently, I literally mean, I never intervened at any point. The students were motivated as they felt that they had ownership in their own learning.

Instead of straight extension tasks, which are cool but have too much structure, I decided to have an open investigation. One investigation title and students chose how they responded to it. We had essays, presentations, documentaries, posters. It was awesome. One student actually created a computer game in Powerpoint. And then went on to teach the whole class how to make the game and everyone made a computer game in powerpoint:

My HOD also started an animation competition, having taught Y9 how to animate in flash and movie maker last year, we just let them do their thing. And here is one of the entries:

Another challenging year with the new Edexcel GCSE. By week 4, there were lots of demotivated students, who did not know what they were doing or where they were going. In order to keep them on their toes and engaged, for practically every lesson, we tried to find a WOW moment (something Villiers Park had spoken about). A jaw dropping moment in the lesson, be it a video, demo, piece of work which would make them go wow. It definitely kept them on track and interested. Here's an example of a WOW moment for our venues lesson, "when choosing a venue, don't judge a venue based on it's appearance as magic can occur at any time"

AntiVJ - Déshérence from Romain Tardy (AntiVJ) on Vimeo.
Another thing I did was have "The conversation". Inspired by Ian Gilbert's awesome book Essential Motivation in the Classroom , we talked about "What's the point of ICT". It was a good honest conversation and helped our rapport a lot. I also had the talk about who they want to be and choosing between two extremes: 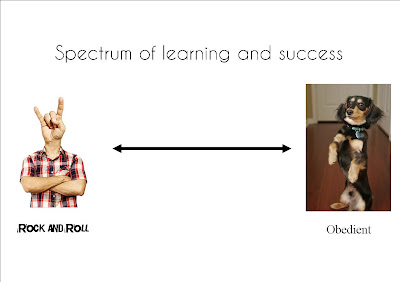 The infographic above shows on one side of the spectrum, "Rock and Roll" i.e. doing whatever you wan't and probably having lots of fun, regardless of what your teacher or the exam board says. On the other side of the spectrum is "Obedient". The Times New Roman says it all, you do everything you are told and try to meet every point on the mark scheme. It's probably quite a boring and unenjoyable existence.

The aim is to find a middle ground. If you're completely Rock and Roll, you probably won't do too well in your exams. If you're totally obedient, you might not enjoy your time at school much or be that creative, you'll be conventionally brilliant, but boring. As a student, you need to develop an appropriate level of scepticism and question your teacher and the syllabus. At the same time, you need to be aware of what you need to do to succeed. Finally, you have to have fun and enjoy yourself. Finding the balance is key.

Inspired, some students did find the balance and flourished after this talk in May.

More independent tasks. The brief was to create an advert for the inside of your music magazine:

What didn't work
1) I let groups choose who they work with for their A2 coursework. This needs moderating, as entire groups dropped off the course. I think, given that this is media production each group should have at least one "super organised" individual that keeps the rest of the group in check. Otherwise, as one student slips, it gives others the permission and excuse to slide away too.
2) Not moving students sooner in the seating plan. 3 students who I did move in the seating plan made a complete turnaround and made at least 3 grades improvement (E-grade to a B-grade). I think I need to be more assertive in separating groups that are not working, even if it means wasted time logging students out.
3) Marking-I really need to get in to the habit of marking more regularly and sticking to marking deadlines that I set students.
4) Asking students to do something, but not explaining why. e.g. Saving work in certain area's. Using a USB stick, using e-mail. I tend to explain design principles well, but felt that I didn't have the time to explain procedural/practical best practice. Next year, I will try to take time to explain things like Read Only, different network drives for saving work etc.
What I will try next year
Instead of simply decorating my room the way I like it (see below). I will instead ask students to bring in one item from home themselves which they think is relevant to ICT. They will need to stand up for 30 seconds and explain to their peers how their poster/item/hanging object is relevant to ICT. This will ensure that students get to decorate their own room and feel ownership of their room. Hopefully, they will bring in some positive posters too!