As Hawking had arrived late to the lecture, her was unaware that his lecturer had told the class that these questions were "extremely challenging". When teased by his contemporaries and asked how many questions he had managed to complete he replied, "I only had enough time to complete the first ten..." On a more trivial note, a friend of mine name Jo works at a law office. She's allergic to nuts which is a shame because once in a while their office host Ferrero Rocher eating competitions. The challenge is to see how many you can eat in a minute. Her colleague managed to eat 8 in a minute. They later found out that the world record is 7 in a minute. I would suggest that if somebody had told her colleague that the world record was 7, perhaps this would have set a glass ceiling for him and he would have stopped trying at 6? Side note: Unfortunately the experience was so nauseating that he's not willing to attempt the feat again!

The glass ceiling theory comes from an experiment with putting a flea in a jar. Fleas can jump/fly to any height. But if you put one in a jar with a see through lid on it, it will jump but keep hitting this glass ceiling. After a while, it will jump but not so high, so it does not hit the glass ceiling. Even if you take the lid off, it still thinks the lid is there so it stops jumping as high. How many times have you told someone or been told that something is impossible? If nobody tells us something is impossible or if we choose not to believe them. We can achieve anything we put our minds to. Here are some b-boy (breakdancing) moves which were once deemed impossible:


To close, I would like to leave you with a philosophy to live by and to pass on to others, your peers, students and friends: 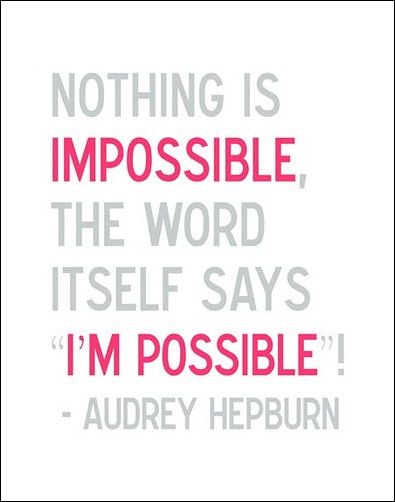 Further evidence that we can do anything we set our minds to:


Footnote: Stephen Hawking's peers had been up all night working on the problems. Stephen Hawking went to bed early and only started on the morning of the next lecture.