Dan Roberts opens his speech by stripping. Seriously, we talk about taking risks on the big stage; this guy strips and gives a big confession. His confession, he's a Geek. I love him already. He proclaims that "learning was his release, learning saved him". I could completely relate, growing up in a coal mining village of Bentley in Doncaster there was not a lot going on in the late 80's and early 90's. We used to ride the streets on our BMX's and hang out in parks getting "up to no good, started causing trouble in the neighbourhood"-if it sounds like the Intro to the Fresh Prince of Belair, it was kind of like that. Education definitely saved me.

Dan was an uber geek though, he was switched off by exercises from pages of his Maths book and from copying from the bored. I realise I have misspelt the word "board", but in this case, I think the typo is quite appropriate so I'll leave it in. Back to Dan, being a Geek he would pass time by making up his own little questions and passing them to friends. If you were educated in the 20th century, you will probably remember the classic Q: What is 8 x 6922251. The answer on the calculator when turned upside down was: 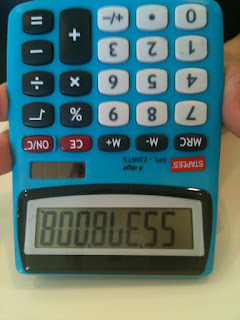 Back to the present day, Dan reminds us that ICT is not just a tool for learning, but a whole new way of learning. His students at Saltash.net community school for example wanted to learn about free range chickens and farming. Dan, like most teachers come across this problem and told them that it was on the syllabus for next year (that was the truth). But the kids couldn't wait, they really wanted to learn about it now. Rather than resist it he did something quite revolutionary/innovative himself. He told the students to research the topic themselves and develop their own scheme of work and resources to teach the rest of the class. The kids went "all out" and possibly got a little carried away, saving some chickens from the local battery farm and releasing them into the school grounds. They then went and set up a webcam called "eggCam". They used their mobile phones to document and blog the process. In the end, they were asked to speak at conferences. One was in Indonesia, they didn't actually get to go to Indonesia unfortunately, but they did get to do a video conference from their local university. Unbeknown to them, this was broadcast live and watched by 30 million people! Now that's Education Revolution!


On to the next generation, Dan's own two-year old son is proficient with playing games and watching PoPat (Postman Pat) on his iPad. And when he goes to school, he will want to interact and use his iPad to learn, but may possibly be banned from doing so. Not letting a student use an iPad is the equivalent to not letting a 20th Century learner use a pen! Indeed, the biggest fear for education is that we have all this wonderful technology and we won't let our students use it. So we should educate students to use mobile learning devices responsibly and trust them to use them responsibly. Easier said than done? Well Dan also set up a website to help students, parents and teachers get their tech unblocked. It is aptly named: http://www.unblockedu.com/ .


School will be irrelevant unless we bridge the gap between how students live and learn outside of school and how they live and learn inside school.
These are exciting times for us all.
Remember, Geeks will rule the world!
Posted by Mr Lau at 15:28